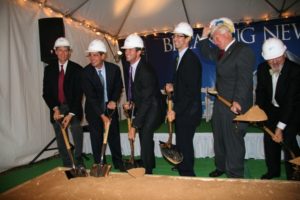 If Thursday’s groundbreaking for the 1812 North Moore Street office tower was anything, it was a vote of confidence in the DC area, and Rosslyn specifically, as a commercial center.

“The fundementals of our market are probably the best in the entire country, if not the world,” said Tim Helmig, the executive who just placed a $30 million bet on Rosslyn. “Investors worldwide have focused on the [Rosslyn-Ballston] corridor.”

Helmig, who heads the DC office New York-based Monday Properties, said he is embarking on the project without a signed tenant and without full financing because he believes that demand for office space in Rosslyn will be there once the building is completed. His company is so sure of Rosslyn’s viability that a full 45 percent of the company’s portfolio, in square feet, is based here.

“You’re seeing that a market like Rosslyn can withstand what is arguably the worst recession in American history, and move forward on a speculative office building,” Helmig said as a group of developers and local leaders gathered for lunch on the empty 30th floor of an existing Monday Properties building on Wilson Boulevard. 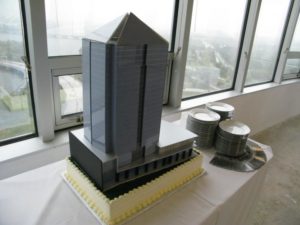 Congressman Jim Moran, who joined Arlington officials and Monday Property executives on stage at the ceremonial groundbreaking, said the event will help inspire confidence in the country’s economic recovery.

“This sends a signal to the whole region that the future is going to be brighter than the past,” Moran said. “It has made it clear that [the Washington area] is going to lead the country out of this recession.”

“This building and Central Place and some others are going to change the market dynamics of Rosslyn,” he said. “It’s going to be competing with some of the best of the District.”

With every new development, Rosslyn strays further from the 1960s-era planning that has made it a pedestrian-unfriendly, car-centric concrete jungle. Modern Rosslyn was built at a time when more people commuted from Virginia to DC than from New Jersey to New York City, Holzheimer said. The elevated walkways and parks that crisscross Rosslyn were built with a singular goal: get pedestrians off street level so they don’t impede traffic.

The new trophy towers will bring new workers and residents to Rosslyn, which developers hope will speed along Rosslyn’s transformation from a 9-to-5 community to a 18-to-24 hour community.