“We are lucky to be Arlington,” county manager Barbara Donnellan said, kicking off the board’s initial guidance for the fiscal year 2012 budget.

Donnellan was referring to the fact that property values — and, thus, tax collections — have stabilized in Arlington, while other local communities continue to feel the pinch from the recession.

Even with a cautiously optimistic outlook, however, the county is still staring down a $25-35 million budget shortfall for FY 2012.

Reflecting the continued financial pressures, the board on Saturday issued budget guidance to Donnellan that was conservative in tone.

The board asked Donnellan to limit budget growth to 1.14 percent — the rate of inflation. The limit does not apply to additional spending required by the school system and as a result of the county’s commitment to four current capital projects (including a new fire station, Long Bridge Park, and the Mary Marshall Assisted Living Residence). 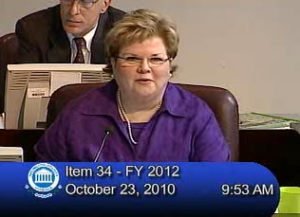 Donnellan says the county will likely collect an additional $13.8 million in revenue, based largely on inflation.

At the same time, the board asked Donnellan to continue investing in affordable housing while preserving the “safety net for those in need,” as well as public safety and health protections.

“This guidance reflects the Board’s desire to tightly constrain spending growth in uncertain economic times, while acknowledging that there is a need for some additional spending to fulfill our previous commitments to projects, and to support our public schools,” board chairman Jay Fisette said in a statement.

The board approved the guidance by a vote of 5-0.

Donnellan will present her proposed FY 2012 budget to the board in February.