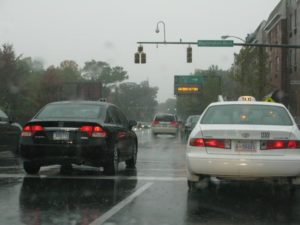 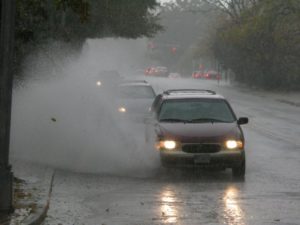 (Updated at 3:00 p.m.) Driving rain and high winds knocked out power, flooded roads and led to numerous accidents in Arlington this morning.

Parts of Ballston and the area around Lee Highway and North Glebe Road lost power during the storm. A storm-related electrical fire in the parking garage of the National Science Foundation building caused dozens of workers to be evacuated. As of 2:50 p.m., the Arlington Central Library was still without power.

During the storm, several accidents were reported on I-66 and elsewhere.

On Washington Boulevard near Utah Street, north of Ballston, standing water in one of the far lanes caused a big splash as cars drove through it. Further up the street, at the intersection with Glebe Road, a backup formed as traffic lights flashed yellow.

The National Weather Service has issued a flash flood warning until 4:15 this afternoon, and a tornado watch until 9:00 tonight.

Update at 3:05 p.m. — Central Library has closed until further notice due to the lack of power and phone service.

Update on 10/28 — More about the Ballston power outages here.