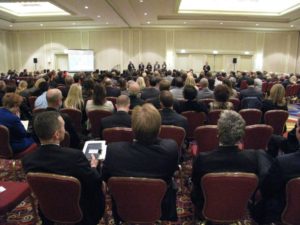 If the sea of suits at the Bisnow “A Whole New Crystal City” conference at the Crystal Gateway Marriott was any indication, local businesses are quite interested in the neighborhood’s future.

With the newly-passed Crystal City Sector Plan calling for more housing, more offices and more ground-level retail, money-making opportunities abound. And for the representatives of non-profits in the audience, the dollars flowing into Crystal City also present cultural opportunities.

On Tuesday the board has approved the financing mechanism for $207 million in infrastructure improvements around Crystal City, raising the green flag for major private investments.

The plans would likely call for the demolition of the existing buildings. One such building was thought to be 223 23rd Street, which housed the G-40 street art exhibit earlier this year.

Shear also brought up the possibility of making Crystal City more “green” by implementing a district energy system (centralized heating and cooling plants serving numerous buildings). District energy, he said, would be consistent with the county government’s energy goals, as stated in the current draft of the county’s community energy plan.

Despite all the changes planned for the neighborhood, officials said that some things would not change.

Crystal City Business Improvement District President Angela Fox told that audience that the famous Crystal City Underground (or, in the preferred local parlance, “interior walkways”) will be a part of the “new” Crystal City. She said local residents have expressed a desire to keep the walkways — which provide shopping options in addition to a means to get from place to place comfortably in bad weather.