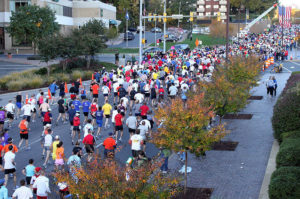 It’s going to be very hard to get around certain parts of Arlington on Sunday. The Marine Corps Marathon will shut down streets in Rosslyn, Crystal City and Pentagon City. The Key Bridge and a stretch of Lee Highway will also be closed.

The good news is that Metro will be opening at 5:00 a.m., two hours earlier than usual, to accommodate marathon runners and spectators (the race starts at 8:15 a.m.). Metro will be running additional Blue Line trains for much of the day, but the agency says riders should expect the system to be especially busy.

“Customers can expect crowded conditions, especially after the race as people will have to wait in long lines to get back into the rail stations,” Metro said in a statement.

Also due to the marathon, buses that normally serve the Pentagon Transit Center will be relocated to the Pentagon City station until 4:00 p.m.