It was a whirlwind trip around the 8th District today for Republican congressional candidate Patrick Murray.

With the help of a campaign bus, a core group of staffers and a collection of volunteers, Murray greeted voters in ten different locations around the district, part of his week-long “Road to Victory Tour.”

Murray’s first stop in Arlington was a guest appearance on G. Gordon Liddy’s radio show, which broadcasts from Rosslyn. The two men bantered about Murray’s military service and opponent Jim Moran’s comment that military service does not constitute “public service.”

“I don’t know who this Moran fellow thinks he is, but wow, that really takes the cake,” Liddy said, after rattling off the ranks three children and one grandchild who have served or are serving in the military. 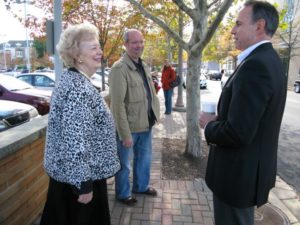 After the Liddy interview, it was off to Clarendon. Starbucks was first on the agenda, for a much-needed caffeine infusion.

(The public appearances had started at 6:30 a.m. at the Huntington Metro station, and weren’t scheduled to end until 7:00 p.m., at the King Street Metro station. “I’ve stopped looking at the schedule because it just keeps going,” Murray said wearily.)

As Murray was getting ready to leave Starbucks, an aide told him he had to make a series of important phone calls. He pleaded for some time to walk around first.

Murray was remarkably unintimidated by the deep blue surroundings: a Whole Foods, a yoga apparel store, an indie rock club. Flashing a big smile, he approached the few people who were walking around Clarendon at 12:15 on a Monday afternoon. The grin was greeted with politeness at worst, and an enthusiastic pledge to vote at best. 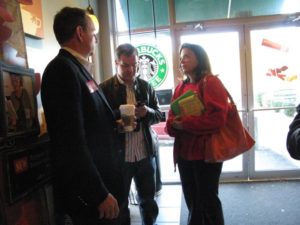 Murray always made sure to ask his targets whether they were 8th District voters, but more often than not engaged them in conversation regardless of the answer. Among those who Murray took time to talk to were tourists from Sweden, a group of guys from Maryland and a woman who asked for directions to Starbucks.

Murray’s Army background was a continuous topic of conversation. He appeared most adept at connecting with veterans and family members of veterans.

“Okay, I’ll talk a little louder,” he joked upon finding out one voter was a former artilleryman. “Huh?” the man said, playing along. The man and his family promised to vote Murray.

Later, while walking down Wilson Boulevard, Murray casually picked up a discarded piece of plastic from the ground. He immediately the identified it as fake M-16 ammunition.

“Point 2-2-3 caliber, 5-point-5-6 millimeter,” I think I heard him recite from memory, although he said it too quickly to be sure. He placed the Halloween accessory back where he found it and kept walking. 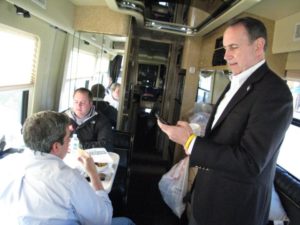 When a staffer suggested Murray head into Whitlow’s, the candidate balked.

“I don’t like to bother folks while they’re eating,” he said.

Though Murray has decided not to advertise on TV in order to save money (he had just over $100,000 cash on hand as of Sept. 30), he talked about a radio ad the campaign had recently launched. He also explained that his burgeoning corps of high school volunteers required a considerable financial outlay.

“The pizza bills have gone through the roof!” he said, smiling but unsarcastic. He consulted with a nearby aide to confirm the expenditure.

Volunteers, Murray said, have made 112,000 calls to voters on behalf of the campaign. An internet ad released today bragged about “11,000 yard signs deployed” by  “800 active volunteers.”

Murray, in keeping with the military theme, confided that the “ground component” of his campaign was his secret weapon. 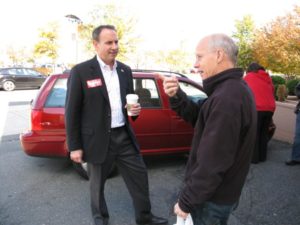 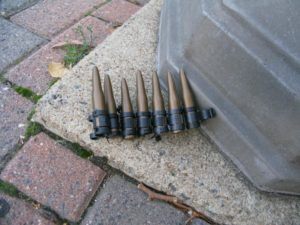