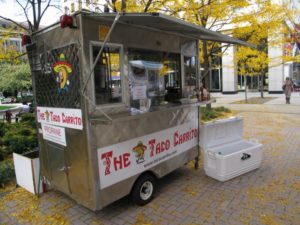 The Taco Carrito cart has been serving hungry Ballston office workers for nearly four weeks. But even regular customers may not realize that the people serving them tasty tacos and homemade Spanish-recipe guacamole have no culinary background whatsoever.

In fact, the reason why proprietors Don Stanke and Colleen Kenney never serve breakfast or dinner is because they work a completely different full-time job — the late shift at a local television station. Don and Colleen, who asked that their employer not be identified, say they came up with the idea for the cart two years ago at a bar, while discussing layoffs in the television news industry.

With so much uncertainty, why not start their own business as a fall back, they thought. Plus, it could be fun.

“I just thought it would be cool to be a vendor, to stand there and talk to people all day,” Don said. 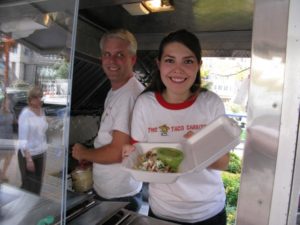 Don, a news photographer, and Colleen, a tape producer, decided to launch a cart before they decided what to serve. With feedback from friends, they narrowed it down to pizza or tacos. Ultimately they decided on tacos, and set off researching the best recipes.

The cart originally launched last year and served Crystal City. All went well for two months, until Arlington police showed up with measuring tape and determined the cart was two feet longer than regulations allow.

“Rules are rules,” Don lamented, even though he says he was told by a health department employee that the extra length wasn’t a problem.

After selling that cart, buying a 20-year-old used cart that required restoration and customization, and getting their paperwork in order, the cart re-launched last month.

Although they did vend at the Marine Corps Marathon in Rosslyn over the weekend, Don and Colleen don’t plan to make regular trips to any other neighborhoods (partially in deference to the District Taco cart, partially to avoid the territory of a certain rival television station).

The co-workers say they would ultimately like to get licensed in the District, when such licenses become available. 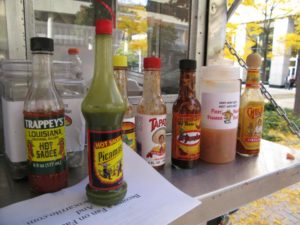 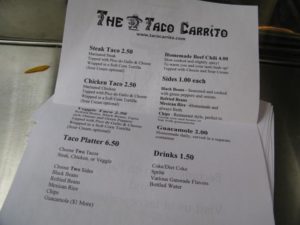