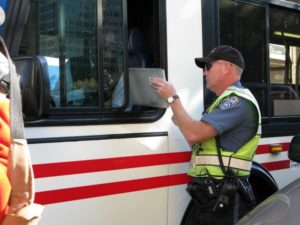 A Metrobus operator was among the unlucky drivers who did not heed warnings of stepped-up traffic enforcement in Rosslyn today.

Arlington police officers positioned themselves at the busy intersection of Wilson Boulevard and North Lynn Street during the morning traffic rush and the lunch time pedestrian rush, in an effort to catch people violating basic traffic safety laws. During the course of the morning rush hour alone, they handed out 33 citations to drivers and gave 50 verbal warnings to pedestrians and cyclists.

The enforcement was part of the Metropolitan Washington Council of Government’s eighth annual Street Smart safety campaign, which officially launched today with a lunchtime press conference in Rosslyn. 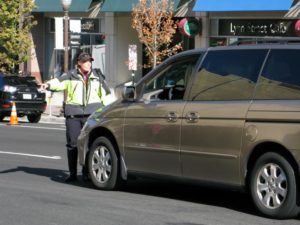 “Pedestrians, bicyclists and cars need to coexist and watch out for each other,” said Arlington County board member Mary Hynes, who told reporters that her own daughter was once struck and injured by a bus. (Clarification: Ms. Hynes’ daughter was struck by a bus in Europe. It was not a Metrobus. This article, which remains in its original form, did not mean to imply the type of bus involved in that incident.)

Scott said the police department will have stepped-up enforcement in the morning and evening rush hours throughout the course of the two-week campaign.

Among those nabbed during today’s lunch time enforcement was a Metrobus operator, who was issued a $91 ticket for making a right turn on to North Lynn Street from the center lane of northbound Wilson Boulevard. At one point, after the officer left to run his information, the bus operator slammed his window shut as television news cameras rolled.

Each year, a whopping 1,000 traffic citations are issued at just the Wilson Boulevard-Lynn Street intersection, according to police.