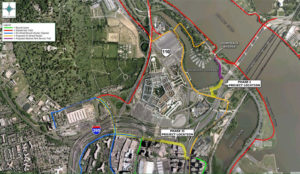 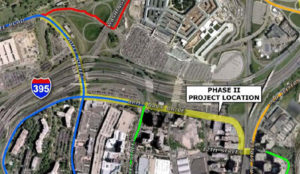 Changes could be coming to Army Navy Drive that will make the intersection-laden and car-clogged stretch of road a lot friendlier to bicyclists.

Both routes are marked in yellow on the maps above.

County engineers currently envision a two-way bike lane on Army Navy Drive, made possible by narrowing the road’s comfortably wide lanes and shifting the median. South Joyce Street will likely only get a single bike lane, since its configuration is set by huge concrete structures that hold up the highways that run over it.

So far, no money has been made available for construction. Bruccoleri says the funds would most likely be allocated in the FY 2013 budget, meaning that the bike paths are at least a few years away.

Also visible on the maps above, in orange and purple, are two envisioned bike route projects.

The purple route, a proposed National Park Service trail, would connect an existing path near Boundary Channel Drive and I-395 to the Mount Vernon Trail near the Humpback Bridge.

The orange route would be an on-street shared route that would go up Old Jefferson Davis Highway, past the future Long Bridge Park, and around the Pentagon on Boundary Channel Drive.

The Park Service trail will likely have to wait on the completion of the Humpback Bridge project. The other proposed route will require the cooperation of military officials, who may or may not want bicyclists pedaling up and down the Pentagon reservation due to security concerns.

No precise timetable has been set for either route.