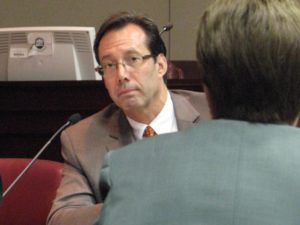 (Updated at 10:30 a.m.) Arlington, the top visitor destination in the state of Virginia, spends just under $1 million on tourism promotion each year. But if the county’s state legislative delegation can’t convince fellow lawmakers to renew the law that allows Arlington to collect those funds as a tax surcharge, the relatively meager tourism budget could drop to zero.

Arlington funds its Convention and Visitors Service through a 0.25 percent surcharge on the standard 5 percent hotel tax. Each year, the county collects $21 million in hotel taxes, or about $5,000 per room, the highest rate in Virginia. Suffice to say that given the hoards of tourists who stay at hotels in Arlington as a cheaper alternative to the District, the surcharge isn’t much of a hindrance.

But the extra quarter of a percentage point, despite having the support of the Arlington Chamber of Commerce and the local hotel industry, may be a tough sell in Richmond.

In an anti-tax, Tea Party kind of a year, Arlington’s Democratic lawmakers say that even passing something as simple as a re-authorization for Arlington’s hotel tax surcharge could be difficult.

“It’s going to be extremely challenging to get this bill through this year,” said Del. Bob Brink. “It has the dreaded T-word in it.”

Brink seemed to tacitly acknowledge that the county’s strained relationship with Richmond — caused in part by the county’s HOT lanes lawsuit, the Secure Communities opt-out fiasco and other slights — has also contributed to the degree of difficulty in gaining legislative cooperation.

“We’re in a very challenging environment, both fiscally and otherwise,” Brink said.

At one point board member Chris Zimmerman parted from the board’s stated position and questioned whether it was worth the legislators’ effort for a mere million dollars.

“Should this be one of the things we expend political capital on?” he asked.

In so many words, ‘yes’ seemed to be the response.

“It is going to be a challenge, but I think we can do it,” Brink said.

The current tax authorization expires on Jan. 1, 2012. Arlington will ask that it be extended for another three years. The approval requires a 2/3 vote in each chamber of the state legislature.