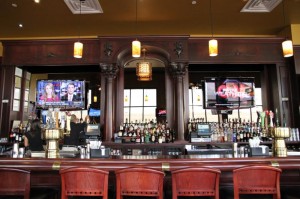 Arlington Rooftop Bar and Grill in Courthouse is now open and awaiting its first customer. (Update at 12:00 p.m. — And just like that, the first customers have arrived.)

This seems to meet the definition of a “soft opening.” So far, there’s nothing that would indicate to passersby that the unmarked door near the Subway on Wilson Boulevard leads to a swank new restaurant with a dozen employees waiting to applaud their first official customer. (Yesterday’s “friends and family” preview doesn’t count.)

The restaurant features two-story high ceilings and huge windows overlooking an inconspicuous part of Courthouse. The menu features American-style favorites and some surprises, prepared under the leadership of Aldrin Asencio, a chef who counts a number of bold-faced local fine dining restaurants — including 2941 in Falls Church and Roberto Donna’s former Galileo restaurant in the District — among his resume.

The restaurant is a bit hard to describe: it’s a mash-up of a number of different styles. The oldies pumped through the speaker system, the Prohibition-era woodwork behind the bar, the generally upscale, modern surroundings and the reasonably-priced menu — together defy easy comparisons.

General Manager John Cosgrove says Arlington Rooftop Bar and Grill is “an upscale sports bar with food that exceeds expectations.” There are plenty of flat screen TVs to watch sports on, for sure, but it’s wholly lacking tacky sports memorabilia on the walls, distinguishing it from just about every sports bar in the area.

The rooptop part is built, but it’s not ready for customers. Expect it to open at some point this spring.