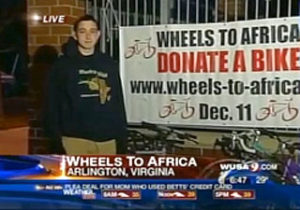 If you have an old bike that you don’t use any more, there’s a more satisfying way to get rid of it than selling it for $5 at a garage sale.

Wheels to Africa, a group founded by Arlington teen Winston Duncan five years ago, will be collecting bikes Saturday to send to people in need in Africa.

Duncan, now 16, held his first collection drive in 2005 when he was just 11.  It was a success far beyond his expectations, and soon local and national media outlets were profiling him and simple yet powerful idea of improving the mobility of needy Africans by sending them old bikes.

Now in its sixth year, Wheels to Africa will be collecting bikes at nine different drop-off locations in Northern Virginia tomorrow from 10:00 a.m. to 3:00 p.m. There will be three Arlington locations: Swanson Middle School, Washington-Lee High School and Yorktown High School. See a list of all drop-off locations here.

The group is also seeking a $10 donation with each bike, to cover the cost of shipping.