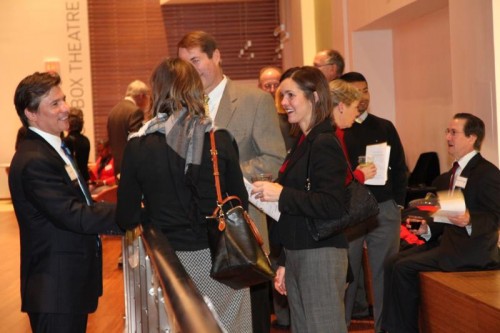 A-SPAN Holds Holiday Gala — The Arlington Street People’s Assistance Network held its 5th annual Help the Homeless Holiday Gala last night at Artisphere in Rosslyn. Party-goers were treated to food from Lebanese Taverna, Santa Fe Cafe and Sushi Rock, music from BMT and a performance by BalletNova. An auction held to benefit A-SPAN proved that deep down, there is something people care about more than politics in Washington. Tickets to a Capitals / Tampa Bay Lightning game fetched a higher price than a private lunch for four with Rep. Jim Moran (D-Va).

VSP Busy During Snowstorm — Virginia State Police responded to a total of 555 calls for service during yesterday’s snowstorm. Of those calls, 109 were for crashes and 135 were for disabled vehicles.

PenPlace Planning Hearing Postponed — Due to the snow, a scheduled planning meeting about the proposed PenPlace development in Pentagon City has been postponed. The current proposal is to build a five-building office and hotel complex located on a large swatch of undeveloped land between Eads and Fern Streets, adjacent to Army Navy Drive.  If approved, concessions from developers (including land owner Vornado) would help to fund the construction of nearby Long Bridge Park. More from TBD.