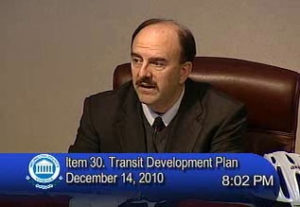 When Chris Zimmerman announced he was stepping down from Metro’s Board of Directors last Tuesday, there was near universal agreement — at least among reporters — that it was a surprising and unexpected move. After all, Zimmerman was the body’s longest-serving member and perhaps its most ardent booster.

But lately Zimmerman had been expressing frustration, both publicly and privately, with what he sees as the inability of federal, state and local governments to properly fund Metro. In fact, at last Tuesday’s county board meeting — just two days before he would announce his resignation — Zimmerman spoke about the issue during a discussion of the county’s transit development plan.

Specifically, Zimmerman was addressing a question about adding more eight car trains on the Orange Line — something that Metro had promised but only partially delivered. Here’s what Zimmerman said:

It is true that the fact that Metro is not being funded at the level it needs to be, and that new needs come up — particularly in response to NTSB recommendations — means funds aren’t available and things like [eight car trains] are being put off. That is a problem. That is a huge problem. It’s not just a problem for Arlington, it is really a crisis for the region. If we don’t start funding Metro at the level it needs to be funded, it is not going to matter what else we do.

The comments seem consistent with what Zimmerman told reporters shortly after announcing his resignation.

When you chronically and persistently underfund an agency like this, it’s not going to perform the way you want it to… If we don’t have a stronger commitment from the region and from the federal government, then there’s nothing the general manager and the staff here can do to handle the problems that concern people, or to meet the growth that is forecast that will doubtless make things worse in another five years and certainly ten years.