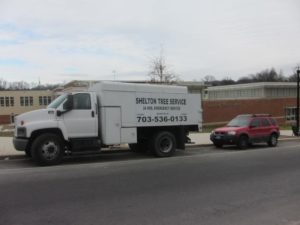 Truck drivers are taking advantage of a loophole in Arlington’s zoning laws that allows them to park for extended periods of time in residential neighborhoods, provided they park next to a county-owned property.

Per Arlington County code, boats, boat trailers and commercial vehicles (defined by Virginia law as a vehicle over 12,000 pounds) are prohibited from parking on the side of a street next to property zoned for residential use — except when unloading/loading or performing services. Motor homes and camping trailers are prohibited from parking in a residential zone for a period of more than five consecutive days.

But as many drivers of such vehicles have figured out, the law does not apply to the sides of streets abutting property zoned as “special” — which includes schools, libraries, community centers, parks and other county-owned property. As a result, the curbs next to some county properties have become a free parking lot of sorts for big trucks.

Parked trucks have been a steady source of complaints to the police department, as well as an acute source of irritation and concern to some residents. 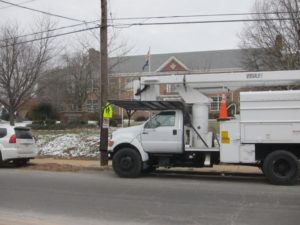 “With an overall heightened sense of  awareness  for large trucks carrying dangerous items, it is funny that this loophole exists that allows large trucks to park next to government buildings,” said Dennis McGarry, who is active in the Highland Park-Overlee Knolls Civic Association. “You would think on that issue alone it would prompt someone to speak up and change the way the law reads.”

McGarry provided us with photos of trucks parked in front of Swanson Middle School (top) and Westover Library (bottom).

“Both of these trucks have lived in our neighborhood for about two years now,” McGarry said. “Both have been sitting in those parking spaces for weeks without being moved.”

County ordinances allow vehicles left unattended for more than ten days to be considered “abandoned” and towed, as long as the vehicles are parked in front of a property other than that of the vehicle’s owner.

McGarry added that there are numerous additional examples of trucks that consistently parked in “special” zoned areas.

While special zone parking is free, trucks that park illegally in a residential zone are subject to a $25 to $100 fine.