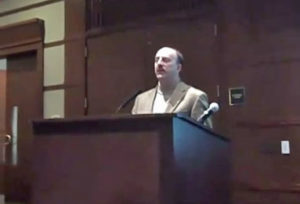 Zimmerman said unemployment and office vacancy rates have stayed low, while “our real estate values have held better than pretty much any place else.”

According to Blue Virginia’s video, Zimmerman went on to say say that it’s not just Arlington’s proximity to D.C. that has helped it remain prosperous.

“It is important to understand that those facts are not accidents — they’re not just good luck,” Zimmerman said. “The reason we’re doing very well, even in difficult times, has to do with many years of working in this community, planning what we do, designing our community in a certain way, and investing in it year after year.”

“We’re intentional about what we do in government in Arlington, and we have been for a long time,” Zimmerman added. “When times are good, we’re thinking about what’s going to happen when things turn down. When times aren’t good, we are going to have to explain the fact that they are going to turn around again… and we’re trying to prepare for that.”

Zimmerman said Arlington’s inclusiveness and its emphasis on community participation in decision-making are two additional reasons why the county is ” talked about, in a lot of ways, with envy.”