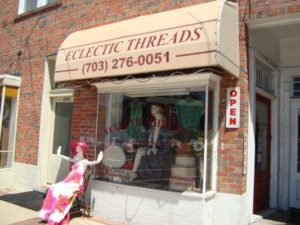 The owner of the Eclectic Threads vintage clothing store in Lyon Park was apparently none-too-pleased with a few unflattering internet reviews of her business.

“Please go to Georgetown to complete your Halloween costume next year – let them deal with your complete lack of respect for other people’s property,” she said to someone who complained about “dour, snotty service” this past fall.

She had a more measured response to a gripe about the fact that many store transactions are cash-only.

“We do not accept credit cards under $100 because banking fees have gone up in the last few years but there is an atm across the street,” she wrote.

But to a woman who complained about a lack of parking, an abundance of “junk,” and a “growling” dog that inhabits the store during business hours, Tara S. had much sharper words.

The dog probably sensed your negative attitude – you’re clearly a nasty person . We’ve been in business for 10 years and we didn’t last this long selling over priced junk (obviously). There’s plenty of street parking for those capable of reading parking signs. We’ve never advertised our shop as an upscale boutique but it is very much a true vintage shop. Everything is sized and very well organized. There’s not a fur coat in our inventory that’s missing fur spots and just an fyi “divits” is spelled “divots” and it means “sod”.

The Yelp user community wasted no time in responding to Tara’s unapologetic retorts.

“If I went onto a business page and saw the owner making those kinds of comments, I would not step foot into her establishment,” one Yelper said today.

“Seeing the vicious attacks made on those who had negative comments makes me want to steer clear of this place,” said another. “Does she not know that if she wouldn’t have given a negative experience, there would be no negative comments? I’m not sure she understands what customer service is all about.”

Even with the negative reviews, Eclectic Threads (2647 North Pershing Drive) currently has an overall rating of 3 out of 5 stars on Yelp thanks to a number of people who said they had a positive experience at the store.

The business has received considerable media attention over the past few years. Last year it was named the area’s best vintage boutique by Northern Virginia Magazine. It has also been featured in the Washington Post, the Arlington Connection, and on WTOP.

A phone call to Eclectic Threads for comment and confirmation of the postings went unanswered this afternoon. “Tara S.” was identified as the store’s owner on Yelp, which has its own owner verification process.