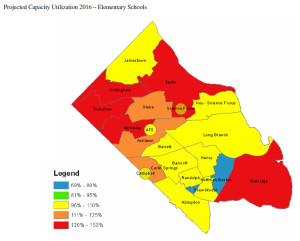 By 2016, the vast majority of Arlington’s public schools will be over capacity, according to new projections presented to the school board last night.

The numbers, in the words of one Tuckahoe Elementary parent who spoke at last night’s meeting, are “truly frightening.”

The most crowded school will be Tuckahoe, at a projected 144.6 percent capacity.

“We’re growing, and we’re growing even faster than we anticipated several years ago,” said Arlington Public Schools Facilities Planner Dr. Alison Denton, who noted that Arlington now has more than 2,000 students enrolled in kindergarten, an all-time record. “We don’t, at this point, see any signs of our enrollment increases slowing down.” 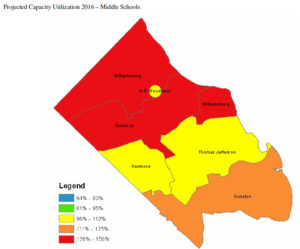 Denton added that the growth in enrollment is county-wide, although certain schools are seeing faster growth than others.

So far, there are no concrete plans in place to deal with the capacity crisis. School administrators suggested the board hold a work session next month to evaluate options, with the goal of presenting recommendations to the community by April.

“I agree that there needs to be a real sense of urgency,” said School Board Vice Chair Abby Raphael. “We need to start making some tough choices and putting them into motion.”

The building of new schools, however, may still be a ways off. Any permanent building project will likely have to wait for approval during school system’s Capital Improvement Plan process in 2012.

Among the strategies being discussed in the near term are increasing the use of relocatable (trailer) classrooms, increasing class sizes, changing admission policies, or finding additional space to utilize as schools or classrooms. 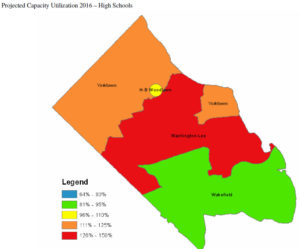 Today the board is being presented with a study that attempted to determine the absolute maximum amount of additional capacity that can be added system-wide through the use of relocatable classrooms. Relocatable use is limited by the size of each school campus. The study counted land currently in use as playfields as potential relocatable space.

“This is not an ideal plan, it’s a worst case scenario,” Denton said.

The school system projects enrollment will increase from some 21,000 students now to 26,700 students in 2016. That number would put Arlington Public Schools just below the peak enrollment record set in 1963. At that time, however, Arlington had 5 to 10 more schools than it currently has, according to administrators.

School Board Chair Libby Garvey suggested that the school system may need to seek outside assistance to help deal with its capacity challenges.

“We’re really going to need to dialogue with our friends on the county board,” Garvey said. “We can’t do things the way we’ve been doing them… because it’s not going to work anymore.”

Update at 1:15 p.m. — The board work session on capacity issues will take place on Feb. 15 at 5:00 p.m., according to school spokesman Frank Bellavia. It will take place in the school board room at 1426 North Quincy Street. The session is open to the public, although there will be no comment or question period.