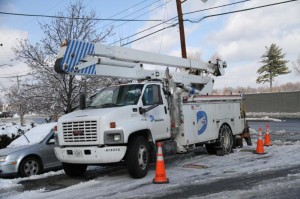 It has been about 16 hours since the snow stopped falling, yet firefighters are still responding to non-stop calls of wires and trees down around the county. The workload speaks to just how widespread the damage from last night’s snow storm really was.

Dominion has been out in force, working furiously to restore service to the thousands of customers who lost power last night. As of 3:45 p.m., the number without power in Arlington has been cut to 6,700 — down from 16,700 last night.

Most Dominion customers in Arlington should have their power restored at some point tonight. Still, Dominion says 10 percent of affected customers will have to wait until Friday night for the lights to come back on. And the company doesn’t expect to have power restored to all Northern Virginia customers until Saturday.

“We have about 2,000 workers engaged in our restoration effort, including crews from Eastern and Central Virginia and North Carolina assisting in Northern Virginia,” Dominion executive Rodney Blevins said in a statement. “Please stay clear of downed lines and use extreme caution if you must be on the roads where snow, abandoned vehicles and downed trees could be affecting traffic patterns.”