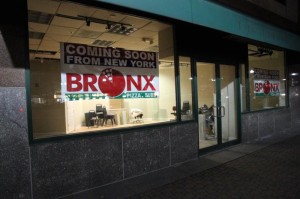 Signs are now up in the windows, announcing that Bronx Pizza is coming to a small storefront at 3100 Clarendon Boulevard.

The New York-style pizza joint was supposedly hoping to open in December when the Washington Business Journal first reported on its existence. At this point, it appears that the store may open this summer.

Bronx Pizza is the brainchild of Caribbean Breeze owner Mike Cordero, who is channeling his Bronx roots to help amp up the restaurant’s authenticity.

“As many of you know, I grew up in the South Bronx, working at a Mom and Pop pizza shop and became quite the pizza maker through the years,” Cordero wrote to friends in December. “I am bringing that originality to VA.”

Operating in an area already chock full of pizza joints, Bronx Pizza hopes to win customers with its late night business. The store may stay open as late as 5:00 a.m.