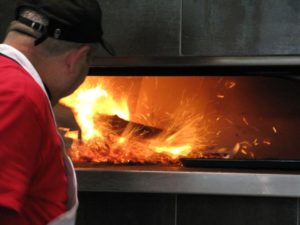 Pizza shops are about to be as ubiquitous in Arlington as Starbucks stores and brown flip flops.

Clarendon, believe it or not, is getting yet another pizza place. Bronx Pizza and Subs is coming to 3100 Clarendon Boulevard in “late December,” according to the Washington Business Journal.

There’s at least one thing that may differentiate Bronx Pizza from the all the others. The pizzeria “will cater to the late-night crowd, serving up dishes until 5 a.m.,” WBJ reports. I don’t know who’s buying pizzas past 3:00 a.m. in Arlington, but being the lone late night food option when the Clarendon bars close could drive some serious business.

Pretty soon, the production of pizza will be an industry in and of itself in Arlington — just below military contractors on the hierarchy of importance to the local economy.