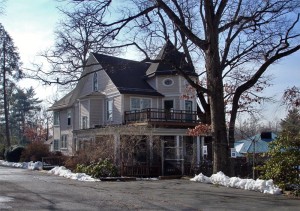 Members of the Overlee Community Association (6020 Lee Highway) voted last night to move forward with a renovation plan that includes tearing down a late 19th century structure that currently serves as the association’s clubhouse.

By a vote of 55 to 4, members approved a $3.1 million renovation plan (see: Option C-2) that includes enhancements to the club’s three pools, more terrace space and a new clubhouse. The existing Victorian-style clubhouse, built in the 1890s and known as the Febrey-Kincheloe House, is expected to be torn down by the end of the year.

Association President Pat Shapiro says the clubhouse is in poor condition and it would be too expensive to try to safely restore it.

“The facility now is at a point where it needs a tremendous amount of work structurally and otherwise,” Shapiro said.

“The deciding factor was cost and usability,” she continued. “[The structure] does not meet our needs as a clubhouse facility… [and] it would take a lot more money to renovate it.”

Although the building is not listed under the National Register of Historic Places, a number of tipsters have contacted ARLnow.com with concerns about losing one of the county’s oldest non-governmental buildings.

“It is a classic example in my opinion of people who are opposed to development and want to save historic structures — but now that it is their property and asset, they want to ‘do what is best for them,'” one tipster wrote. “The historic community is just about apoplectic and will have a huge outcry over this… It is just the easy way out.”

“It is hoped by many that the Arlington Historical Society and other interested parties will appropriately document and photograph the… home before it is lost forever in the fall,” another tipster wrote, after the vote.

Shapiro said the renovation project will now enter the final design phase. The final design of the clubhouse, she said, is expected to include many of the Victorian features of the existing structure.

Construction will to begin after the swimming pools close in September, Shapiro said. The association has hired an arborist to make help preserve as many of the property’s old-growth trees as possible during the renovation.

“Right now we don’t anticipate big problems with the trees,” Shapiro said, adding that the property’s two most distinctive old trees will be protected.

County zoning officials have been notified of the plan and have not voiced any objections, Shapiro said. A blog has been set up to provide updates on the planning and construction process.

The Overlee Community Association is a private 800-member club that was founded in 1957.