(Updated at 4:10 p.m.) Arlington County wants to put residents on a car-free diet, but a spat over on-street parking in Lyon Park shows that residents with cars still have plenty of pull with the county board.

The county’s streets bureau, responding to a complaint from a trash collector, determined that a curvy, two-block stretch of North Edgewood Street is too narrow. With cars parked on either side, firefighters brought in to test the width did not have enough room to open the bins on either side of their fire engine.

Acting upon the results of the test, the streets bureau sent notice to residents that they were planning on restricting parking to one side of the street. But residents fought back and, this weekend, seemed to get some cover from the county board.

Lyon Park Civic Association President Natalie Roy spoke before the board and asked why the county has not found fault with the street’s width until now. She said that elderly residents whose houses lack driveways rely on street parking. Residents tried to create an alternative plan for dealing with the situation, she added, but that county staff made “Draconian” changes to it.

Most board members were sympathetic to the parking concerns.

“The fire truck can be a once in several year occurrence,” said County Board Vice Chair Mary Hynes. “I don’t want a solution for the once every five year event. I want solutions that make livability on this street reasonable.”

“If safety is such a priority, why do we wait until a complaint?” board member Jay Fisette asked, pointing out that there are plenty of other county streets that could potentially be considered too narrow. 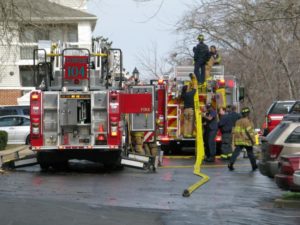 “I am reluctant to have a defined width and a prescribed solution for that once every multiple year situation where a large fire truck might be needed,” he said. He added that removing parking on one side of the street could actually negatively impact resident safety “by having less traffic calming of cars parked on the street,” thus encouraging cars to drive faster.

One voice of dissent was board member Barbara Favola.

“Some people parking on the street may need to park on an adjacent street,” she said. “We’re going to have to put safety first. We can’t compromise on that.”

“It doesn’t make a difference if it’s once a day or once every five years… If we had a fire, we wouldn’t even be able to get our ladder trucks in there,” he said in a phone interview. “We certainly want to balance the overall needs of the community with the safety needs of the community.”

Schwartz noted that the county’s new Master Transportation Plan gives the fire department final say over the width of county roads undergoing improvements. However, he said the department won’t be systematically reviewing streets that are not up for improvement projects.

“It’s our intent… that when improvements to streets are being done… an important consideration will be fire access,” he said. “It’s not our intent to go back and identify streets with difficult access.”

At last check, the county was still trying to find an amicable solution with Edgewood Street residents.