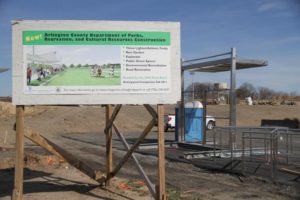 We’re about one year into the construction of Long Bridge Park and some of the park’s features are starting to take shape.

The long rectangular buildings that will eventually house concession stands and restrooms for the park’s multi-use athletic fields now line Old Jefferson Davis Highway. Large, bulldozed stretches of red dirt will at some point become the lush, green Esplanade and rain garden. A lone steel entrance gate sits in a construction parking lot, awaiting completion of a field around it.

Construction on the first, $50 million phase of the park, located just north of Crystal City, is expected to wrap up in September. Design work on a second phase, which includes an aquatics, health and fitness facility, started last month.

The park will have breathtaking views of the Potomac and the D.C. skyline, but don’t don’t expect to attend any outdoor concerts there. The noise from planes taking off and landing at nearby Reagan National Airport is deafening.

The Long Bridge Park construction project kicked off last March, with the official groundbreaking ceremony held a month later. Since then, heavy equipment has only made the ill-kept road that runs next to the park site even more treacherous.

Old Jefferson Davis Highway, which connects Crystal City with Boundary Channel Drive, is a disaster zone, with potholes the size of Honda Civic tires. Although it’s eventually slated to be repaved, but until then it probably should only be traversed with a truck or SUV.

END_OF_DOCUMENT_TOKEN_TO_BE_REPLACED

More Stories
UPDATED: Police Search for Wrong-Way Driver After I-395 CrashRoute 50 Down to One Lane Due to Roadwork