In a mailing that went out last month, Comcast told Arlington County customers that they would be getting “The World of More” — the company’s phrase for a slew of additional high-definition channels — on March 15.

Alas, that date has come and gone and the channels are nowhere to be seen. In fact, the only noticeable change in the past two weeks is that customers can no longer receive basic cable channels without a digital converter.

We’ve been unable to get in touch with Comcast’s PR department, but Arlington County Cable Administrator Rob Billingsley says the company has told him that it will be at least a week until the first batch of new HD channels reaches local television sets. 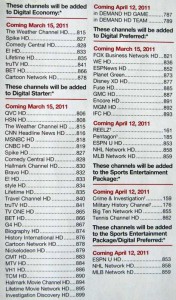 March 24 is now the date when channels including Comedy Central HD, BET HD and truTV HD will be switched on. The lack of truTV in HD will be a big disappointment for college basketball fans — the channel will be airing nearly a dozen NCAA March Madness games this week, including two first-round games tonight.

Update on 3/17/11 — A Comcast rep says all HD channels that were originally scheduled to come online on March 15 will be available no later than March 24.

According to Billingsley, the company said they were delayed in turning off the analog cable channels earlier this month. By making those channels digital-only, Comcast freed up bandwidth for the HD channels. However, no formal explanation was given for why the HD channels were still delayed.

The confusion comes at a time when Comcast’s cable monopoly in Arlington is up for review. The Comcast franchise expires on June 30, 2013, and over the weekend the county board approved a resolution that will start an official evaluation of the company’s performance.

Billingsley says the review will likely consist of public hearings and surveys that will look at Comcast’s technology, performance and customer service. Our informal poll of satisfaction with Comcast revealed strong negative opinions about the company.

Update at 5:45 p.m. — After a period of heavy snow, the transition to sleet and freezing rain is underway, potentially making travel even more hazardous. There have been several…

Read more →
More Stories
You Can Own History, But It’s a Fixer-UpperMorning Notes