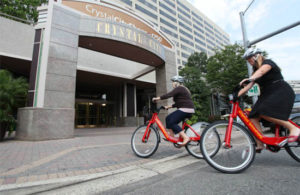 Update at 4:15 p.m. on 4/12/11 — The opening of the first four CaBi stations will be delayed, county officials say. No revised opening date was given.

The long-anticipated CaBi roll-out along the Orange Line will eventually result in 30 stations and 200 bikes added by the end of 2011, according to Arlington County. Crystal City and Pentagon City are already home to 14 CaBi stations.

“Capital Bikeshare is an integral part of Arlington’s commitment to cycling and to providing transportation options,” County Board Chairman Chris Zimmerman said in a statement this morning. “Bringing the red bikes to the Rosslyn-Ballston corridor this year will make cycling more convenient for Metro area commuters, and will offer our community another car-free, healthy transportation choice.”

The four stations that are scheduled to open on Wednesday include: