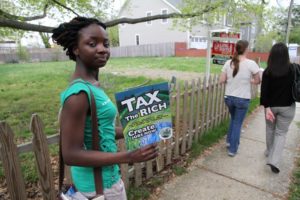 (Updated at 2:45 p.m.) Police responded to the Bank of America at the corner of Columbia Pike and Glebe Road this afternoon after a group of protesters paraded around the branch holding signs and shouting slogans.

“For too long, the government has allowed corporations and the wealthy not to pay their fair share,” Morley said. “Unrestricted greed has led to lay-offs, foreclosures and high rates of unemployment in working class communities.”

Morley said about 50 people participated in the Arlington Bank of America protest. There were no arrests. 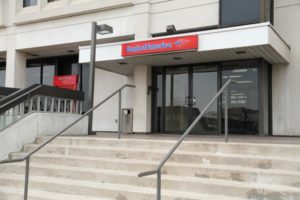 “Companies, like Bank of America, are about profits not jobs,” she continued. “The government must make Bank of America and the big corporations pay their fair share. The revenue can be used to create millions of living wage jobs with benefits and invest in our communities.”

Tenants and Workers United and a group called Right to the City are calling for three new federal tax initiatives. They want all corporate tax loopholes to be closed, they want a 0.25 percent tax imposed on the trading of financial products, and they want a 1 percent wealth tax on the top 5 percent of households. Together, the groups argue, those taxes could generate more than $1.2 trillion per year.