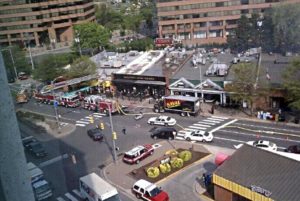 Arlington firefighters are on the scene of a “significant” grease fire at Ireland’s Four Courts (2051 Wilson Boulevard) in Courthouse.

The fire started in the kitchen and produced a lot of smoke, but was quickly extinguished once firefighters made their way into the building. Fire damage should be confined to the kitchen, but there may be some smoke damage and a few broken windows elsewhere in the pub.

Police shut down Wilson Boulevard at N. Rhodes Street during the incident to allow fire equipment to position itself around the building.