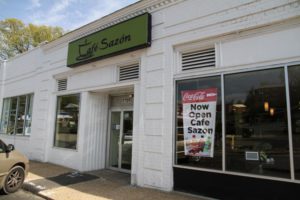 You don’t typically expect to find anything of any culinary significance between a hair salon, a check cashing store and a Goodwill outlet, but Cafe Sazon (4704 Columbia Pike) may be the exception to the rule.

Sazon means “seasoning” in Spanish, which is a good way to describe the contrast of the cafe’s smartly-decorated interior to the rather drab section of Columbia Pike outside its windows. Open since January, Cafe Sazon specializes in South and Central American food and baked goods, with a few American items thrown into the mix.

Co-owner Adriana Torres, who has not left the area since she moved from Bolivia to this section of the Pike as a seven-year-old kid, says that business has started out slow but is picking up. Thanks to a favorable mention on the “22204” email listserv, she says her customer base — primarily Hispanic — has gotten a bit more diverse lately.

Cafe Sazon is open for breakfast, lunch and dinner, and has items on the menu for all three meals. There are omelettes, freshly-baked pastries (made by an in-house baker), fajitas, soups, salads, and daily specials. On the drink menu is coffee, trea, cappuccino, Latin American sodas and Api Morado, a surprisingly delicious Bolivian specialty made with boiled red corn and “zest.”