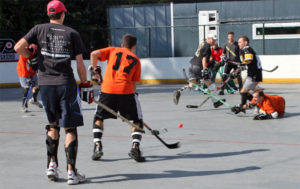 Crystal City may not seem like an obvious venue for team sports, but don’t tell that to the growing number of players who compete in sports leagues in and around the neighborhood.

Starting this year, a few new sports will start to be played in the shadows of the office towers and high-rise hotels that line Jefferson Davis Highway. Among them: street hockey, rugby and outdoor volleyball.

An “old school” street hockey league is currently accepting new player and team registrations. The co-ed league will play on Thursday nights from May through July at a surface parking lot near the corner of 20th Street and S. Bell Street. The league’s start date — May 5 — is set to coincide with the Crystal City’s Fit Week.

A co-ed touch rugby league will play its first game Saturday afternoon, at a park on Eads Street near Ft. Scott Drive. The leagues is still in open registration for individual players.

All the leagues are run by the Arlington Athletic and Social League. AASL is also running an indoor dodgeball and a women’s 3 on 3 basketball league in Crystal City this spring. Both sports are in open registration for individuals.