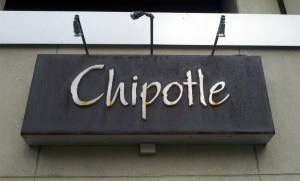 One thing’s clear: Chipotle has been doing a lot of hiring lately.

Why the sudden hiring push?

A Chipotle spokesperson told us that they’re “in an industry where turnover is high.” But recent news reports suggest something else may be going on.

“The feds are cracking down on undocumented workers at Chipotle restaurants in Virginia and the District,” TBD reported last month. “After the U.S. Immigration and Customs Enforcement reportedly warned Chipotle it would be targeted… the Chipotles in Columbia Heights and Woodley Park fired 40 employees who could not prove they were legally authorized to work.”

No such mass firings have been publicly reported in Virginia, but one local says there are a lot of unfamiliar faces among the crew at the Ballston Chipotle (4300 Wilson Blvd). 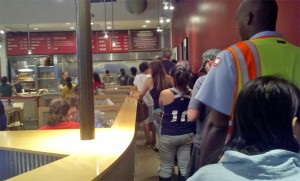 “I’ve been going there for 5+ years and literally most of the same people worked there till a few weeks ago,” Chipotle regular Jamie Cave told ARLnow.com. “When I went in the other night, it was a whole new crew and barely any Hispanic workers (mostly white or Indian). Others have been mentioning that they don’t recognize most of the workers there now.”

A visit to the Ballston Chipotle last night confirmed that, at the very least, the location is understaffed. The line for a burrito around 7:30 p.m. extended nearly out the door.

Chris Arnold, the Chipotle spokesperson, confirmed the Immigrations and Customs Enforcement investigation into the restaurant’s hiring practices in the Washington area, but denied that there has been a mass exodus of employees.

“Early this year, we received a Notice of Inspection from Immigration and Customs Enforcement for about 60 restaurants in the Virginia and Washington, D.C. areas, and we are cooperating with them as they conduct their review,” Arnold said. “As we reported, we are also working with the U.S. Attorney for Washington, D.C., which has asked us to provide them with certain documents for a review they are conducting.”

He added: “We haven’t seen abnormally high turnover… Bear in mind, we don’t always know the reasons people choose to leave their jobs.”