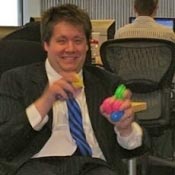 Technology consultant and Not Larry Sabato blogger Ben Tribbett has decided not to run for state Senate, after all.

Tribbett had been considering running for the seat vacated by the retiring Sen. Mary Margaret Whipple. He would have faced a tough primary battle between County Board member Barbara Favola, who Whipple has endorsed, and Lt. Col. Jaime Areizaga-Soto, who is expected to officially announce his candidacy at tomorrow’s Arlington County Democratic Committee meeting.

“We have two capable candidates,” Tribbett told ARLnow.com this morning, adding that he was not planning on endorsing either candidate quite yet.

Tribbett said his decision was a personal one that was made tougher because he had been receiving words of encouragement and pledges of financial contributions.