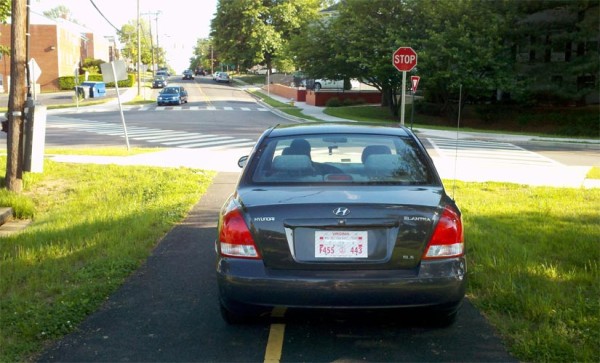 Trail Parking — This car chose an interesting place to park — on a stretch of trail between the county’s new Dept. of Human Services building and Washington Boulevard.

Snakehead Fish Invade Four Mile Run — Predatory snakehead fish have invaded the waters of Four Mile Run, between Arlington and Alexandria. There’s concern that the so-called “frankenfish” could kill off native fish in the stream, as it has decimated native populations of bass and shad in the Potomac. [WJLA]

Marymount Names New President — Arlington’s Marymount University has named a successor for retiring president James Bundschuh. Matthew Shank, dean of the business school at the University of Dayton, will take over as president in July. [Washington Post]

Cell Phones to Get Emergency Alerts — Soon, cell phones in the D.C. area will be capable of receiving emergency alerts via text message. [New York Times]