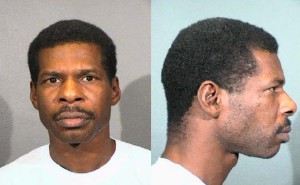 (Updated at 10:40 a.m.) Two years ago, Kenneth Earl Tolliver’s face was showing up on local newscasts after he was accused of robbing a 99-year-old woman in her Silver Spring, Md. home. At the time he was also wanted for two other burglary cases involving older residents, as well as other crimes. Now, according to police, he’s a “person of interest” in a series of office thefts.

Tolliver is being sought for questioning by Arlington police after several office burglaries in Rosslyn and Crystal City. Cops say that someone matching Tolliver’s description poses as a maintenance worker or mold inspector, then enters unsecured or “under-secured” offices and takes cash from wallets, purses and petty cash boxes.

According to a letter sent to property managers:

In all cases the suspect has been described as a black male, approximately 5’10”, 160 lbs, 45-55 years of age, with a sunken or long face and has ALWAYS worn a construction or medical style dust mask partially covering his face. The suspect’s MO is that he usually brings with him a notepad or other prop and tells workers that he is inspecting the ceiling tiles for mold or other HVAC issues.

Preliminary investigation into this series has revealed that there are at least 10 additional incidents in the region including Prince William, Fairfax, Alexandria, Falls Church, Vienna and Leesburg. Please be alert and contact the police immediately should you encounter this individual.

Police are encouraging workers in secure offices to not hold doors open for strangers and to check with building management should they encounter an unexpected repair person.

At the moment, Tolliver is not wanted for any crime in Arlington. He is, however, wanted for grand larceny out of Prince William County, according to police.