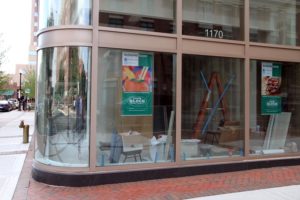 Health nuts and sweet tooths will both have something to celebrate as two new stores prepare to open in Clarendon this summer.

South Block Smoothie & Burrito Co. is telling fans on Facebook that it hopes to open at the corner of 11th and Garfield Streets “around the 4th of July.” The store will offer real fruit smoothies, whole wheat burritos, salad wraps, acai bowls and Pleasant Pops, according to its web site.

South Block is located in a 714-square-foot storefront on the ground floor of the Clarendon Center project’s ‘south block’ building. It’s being launched by Amir Mostafavi, who owns the Campus Fresh store in George Washington University’s Lerner Health & Wellness Center. 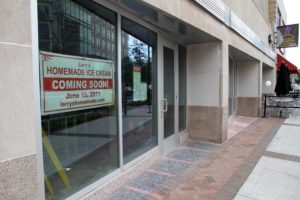 A couple of blocks away from South Block’s health-conscious vibe, Larry’s Homemade Ice Cream is planning on opening at 3018 Wilson Boulevard, in the Clarendon Center project’s ‘north block’ building. Signs in the window say Larry’s will open on June 15.

The location is the second for Larry’s Homemade — which currently has a store in Crystal City. Larry’s will offer locally-sourced and produced ice cream, as well as sundaes, shakes, non-fat yogurt, espresso drinks, cookies, cupcakes, brownies, biscotti, muffins, pastries and baklava.