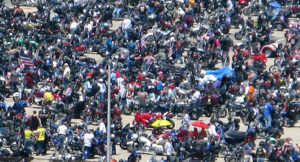 Rolling Thunder is back this year and several road closures are planned as a result.

The noisy annual Memorial Day weekend tradition will kick off on Friday, when motorcyclists from around the country will start flocking to the D.C. area to boost awareness of American prisoners of war and service members who went missing in action.

The Rolling Thunder headquarters hotel is the Hyatt Regency Crystal City, so South Arlington residents who live near Route 1, Route 110 and I-395 should expect to hear a lot of revving engines over the weekend.

As part of the rally, several roads will be closed near the Pentagon on Sunday. Washington Boulevard will be closed from I-395 to the Memorial Bridge from 8:00 a.m. to 4:00 p.m. In addition, Arlington National Cemetery will only be accessible from the southbound GW Parkway or northbound Route 110.

Authorities are warning drivers in Northern Virginia to expect “large numbers of motorcyclists” and possible traffic delays on Sunday. The Rolling Thunder festivities will wrap up Sunday evening.