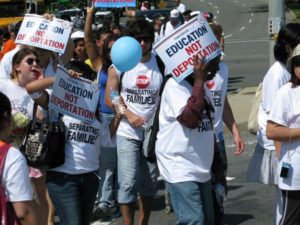 Pro-immigration groups will be marching through the streets of Arlington tonight to protest the deportation of illegal immigrants.

Protesters will march from George Mason University Founder’s Hall, at 3351 N. Fairfax Drive in Virginia Square, to the Arlington County jail, at 1435 N. Courthouse Road in Courthouse, where they will hold a rally against the federal ‘Secure Communities’ immigration enforcement program.

The march is scheduled to begin at 6:45 p.m. Organizers expect the rally outside the jail to start at 7:15 p.m.

“Speakers at the rally will include representatives from Virginia, Maryland, DC, New York, Illinois, California and other locales affected by the discredited deportation program,” organizers said in a statement.

The march and rally will coincide with the start of the Turning the Tide National Summit, a three-day pro-immigration gathering that’s being held this year at GMU’s Arlington campus.

In September the County Board voted unanimously to attempt to withdraw from the program, saying that Secure Communities “will create divisions in our community and promote a cultural fear and distrust of law enforcement.” County officials eventually determined that it was not feasible to withdraw from the program. A coalition that helped organize local opposition to Secure Communities was later given the county’s James B. Hunter Human Rights Award.