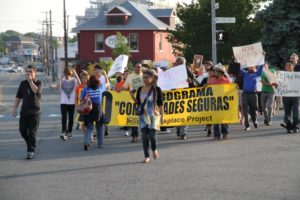 (Correction at 11:50 a.m. — A quote from Capt. Wasem has been removed. The quote was from his prepared remarks, but was not actually said during the rally.)

More than 100 demonstrators marched through the busy streets of Virginia Square, Clarendon and Courthouse last night in support of immigrant rights and against deportations.

The protesters, assisted by a police escort, marched from George Mason University’s Arlington campus to the Arlington County jail. Holding signs and chanting slogans in English and Spanish, the protesters made their message loud and clear for scores of bewildered bystanders and outdoor diners in Clarendon.

Once at the jail, a number of speakers addressed the crowd. Most condemned the federal ‘Secure Communities’ immigration enforcement program while praising Arlington for attempting to “opt-out” of the program.

“Arlington was one of the first communities to opt out of Secure Communities,” said Tenants and Workers United Interim Director Jennifer Morley. “When people who live in Arlington heard about it, they spoke out, the organized. Arlington knows that Secure Communities is not the kind of initiative we want in our community.” 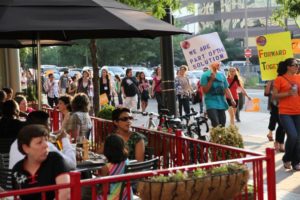 “We are watching our elected officials closely,” said a priest. “You are our brothers and sisters and our children.”

A woman identified as “Elizabeth” tearfully spoke about how she was deported before, but made her way back to the area so she could support her young daughter, who has a heart condition.

Also speaking at the rally was Arlington County Police Capt. Jim Wasem, who spoke on behalf of the department. ACPD Chief Doug Scott has previously expressed concern that Secure Communities could dissuade immigrants from cooperating with police investigations.

“Arlington is a world class community that respects the human rights and dignity of all who work, live or visit here,” said Wasem. “The Arlington County Police Department has a long and proud history of community policing… We recognize that we would not be successful in our mission of delivering high quality police service if it were not for our relationships with our community partners.”