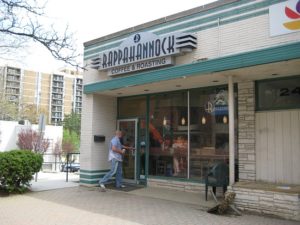 Jason Gooljar, the technology director for a D.C.-based environmental non-profit, is on a mission.

Gooljar wants to raise $200 to get local, independent coffee shop Rappahannock Coffee & Roasting (2406 Columbia Pike) some new WiFi gear. It seems that the cafe’s existing wireless router is slow, outdated and can barely accommodate more than four simultaneous WiFi users. To remedy the situation, Gooljar is asking customers to make donations to help update the equipment.

“It’s a small coffee shop and the owners don’t make that much to be spending it on things like this but people are here all the time and we could benefit from a new router!” he wrote on ChipIn.com, a web site that helps users conduct grassroots fundraisers.

While we don’t doubt Gooljar’s sincerity — he said he’ll provide donors with a photo of him presenting the router to the store’s owners — we ask that potential contributors do their own due diligence before donating.

END_OF_DOCUMENT_TOKEN_TO_BE_REPLACED

More Stories
Missed Connections in Unlikely PlacesCounty Asks: What Should We Get From Comcast?