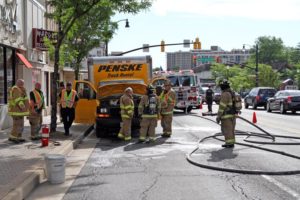 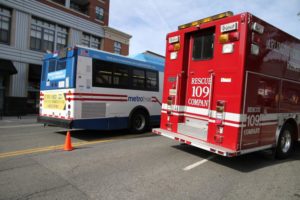 Update at 9:30 a.m. — The accident has been cleared and Columbia Pike has reopened.

Westbound Columbia Pike has been shut down in front of the Arlington Cinema Drafthouse due to a truck fire.

A rental truck caught fire around 8:30 this morning. Firefighters quickly extinguished the flames, but an oil leak has now reportedly been discovered.

Firefighters and police are expected to remain on the scene for about an hour — until about 10:00 a.m. — as the leak is cleaned up. Traffic is being diverted onto Walter Reed Drive.

While ARLnow.com was on the scene, a Metrobus driver decided to skip the detour and instead drive westbound in the eastbound turn lane of Columbia Pike (see photo above).