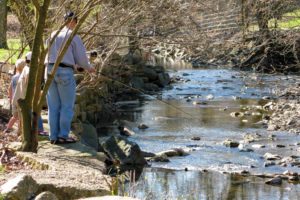 Over the weekend the County Board accepted a $485,000 federal grant to help restore wetlands and the stream bank along Four Mile Run.

“This federal grant will help us fund the crucial first phase of the comprehensive restoration of Four Mile Run,” Arlington County Board Chairman Christopher Zimmerman said in a statement. “Restoration of the wetland and stream banks in tidal Four Mile Run, which we expect to begin work on next year, is central to the effort to return the stream to a more natural, better functioning waterway that will serve people from across the region.

“The Four Mile Run watershed encompasses approximately two-thirds of Arlington County and forms the southern border with the City of Alexandria, creating a shared waterfront resource,” the county said in a press release. “The tidal restoration project is the central element of a comprehensive effort by the two communities, with the help of the federal government, to restore the lower section Four Mile Run, which was channelized by the Army Corps of Engineers in the 1970s.”