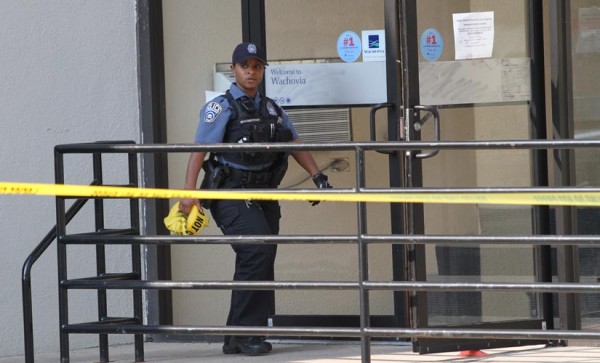 Police have released more information about yesterday afternoon’s armed robbery of the Wachovia Bank in Courthouse.

The Arlington County Police Department’s Robbery Unit is seeking the public’s help to identify a man who robbed an Arlington bank yesterday afternoon.

The suspect entered the Wachovia/Wells Fargo Bank in the 2000 block of Wilson Boulevard at approximately 3:30 p.m. on Monday, June 20, 2011. He displayed handgun and demanded money. After receiving cash, the suspect fled on foot.

The suspect is described as an African American male in his late 20’s, 5’10” and 160 lbs. At the time of the robbery he wore a black hooded sweatshirt with silver writing on the front, black pants, and a mask over most of his face. The suspect was also carrying a dark colored bag.

Anyone who has information about this robbery or the identity of the suspect is asked to call the Arlington County Police Department Tip Line at 703 228-4242, or Detective Donald Fortunato at (703) 228-4197. Det. Fortunato can also be reached by emailat [email protected]

The crime was the third bank robbery in Arlington so far this month. The first two occurred at BB&T Bank branches in Clarendon and on Lee Highway. The suspect in those robberies was described by police as a white male in his 50s.