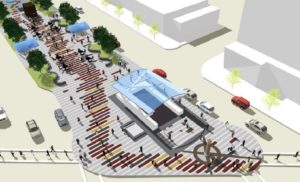 (Updated at 10:15 a.m.) Arlington County has released sketches of a planned revamp of the plaza outside the Clarendon Metro station.

The project, set to begin construction later this year or early next year, is intended to improve the currently under-utilized space by creating “an active, multi-use plaza to accommodate the farmers’ markets, music events, vendors and other community activities, while enhancing pedestrian access to Metrorail and transit.”

(Correction: Earlier we asked about whether a tree on the site should be saved. It turns out that the tree was recently removed. The photo we used of the tree was from a county presentation this month, but it was apparently taken before the tree removal. We apologize for the confusion.)

What do you think about the redesign plans?