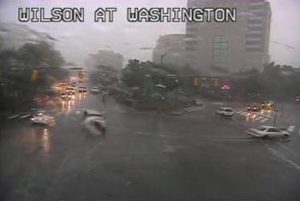 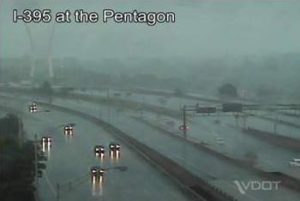 Update at 4:10 p.m. — That’s all folks. The storms have moved southeast, out of Arlington.

Update at 4:10 p.m. — N. Vance Street is reported to be blocked at Lee Highway due to a large branch in the roadway. Police are on scene.

Update at 3:55 p.m. — Several manhole covers have been dislodged by the flooding. Dislodged manhole covers have been reported on the 1200 block of S. Scott Street (since taken care of by the fire department) and at 5th Street and and N. Montague Street. There has also been a report of a car that was damaged after driving into an open sewer portal along Columbia Pike.

Update at 3:35 p.m. — A second severe thunderstorm is approaching Arlington. From the county’s Office of Emergency Management:

The National Weather Service has issued a second SEVERE THUNDERSTORM WARNING for Arlington County until 4:15 PM. Doppler radar indicated a thunderstorm approaching the County which has intensified past severe limits. This storm will effect the entire county with heavy rain, large hail, and damaging winds of 60 MPH possible.

Significant cloud to ground lightning is occurring with this storm. All outdoor activities should be postponed until this storm passes. Severe Thunderstorms can produce tornadoes with little or no advanced warning. Residents are urged to seek safe shelter indoors until the storm passes and remain alert for any additional warnings.

Update at 3:30 p.m. — A transformer fire has been reported on the the 2700 block of N. Wakefield Street. The fire department is investigating.

Update at 3:30 p.m. — Possible traffic issues due to standing water have been reported on Route 50 between Rosslyn and Courthouse, on Route 50 near Washington Boulevard and on Route 50 under the Glebe Road bridge.

Update at 3:10 p.m. — A flash flood warning has been issued for Arlington.

Numerous activated alarms and flashing traffic signals have been reported as a result of the storm. Some flooding of roadways has also been reported.