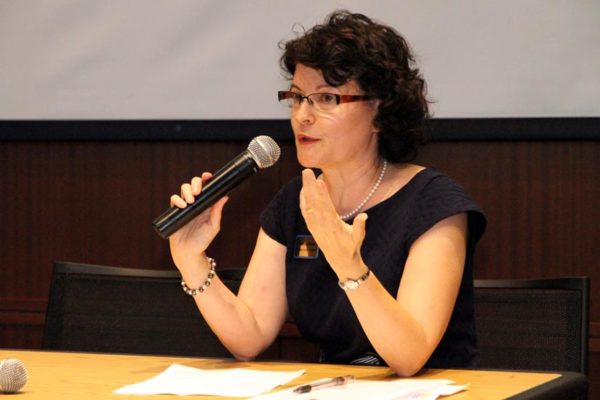 The Barbara Favola for State Senate Campaign is in the field with a standard political tracking poll.

The final question of the poll asked:

If the election in the Democratic Primary were held today, would you vote for Jaime Areizaga-Soto, the Republican, or Barbara Favola, the Democrat?

The wording of this question is obviously incorrect, and it was caused by a simple cut-and-paste, clerical error.

When the error was brought to our attention, we immediately fixed the question.

Any suggestion this was done as a campaign tactic is entirely incorrect. We apologize if this clerical error caused any confusion among the people who received our poll call.

The kerfuffle, which comes on the heels of criticism of Areizaga-Soto’s negative mailers, has prompted one local political-type to endorse Areizaga-Soto. Ben Tribbett, who was once considering a run for the 31st District state Senate seat that’s being vacated by state Sen. Mary Margaret Whipple, says that he’s “disappointed” with Favola.

His endorsement statement (after the jump) mimics Del. Bob Brink’s endorsement of Favola, which decried “Karl Rove-style mudslinging” in the race.

Up until this week I had intended to remain neutral in the Democratic primary for the 31st Senate District. Today I am endorsing Jaime Areizaga-Soto. Throughout his public career he has shown how to translate values into action, and I am certain he will be an effective voice for Northern Virginia’s priorities in Richmond.

I’m disappointed that my friend Barbara Favola has been persuaded that victory in the primary can be achieved through slick negative campaign phone calls. Possibly her consultants have cited examples where a campaign based on harsh personal attacks was successful in an Arlington-based district: I cannot recall any in the two decades I’ve been involved in Northern Virginia politics, but I am familiar with more than one that had the precise opposite effect.

Voters in our region have shown repeatedly that they want their public officials to talk about the issues that touch their daily lives, and that they have little tolerance for Karl Rove-style mudslinging. Any candidate who doesn’t understand that is unqualified to represent us.