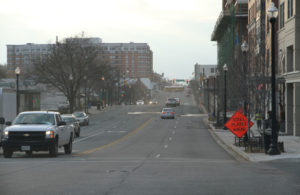 All three areas, the report says, are affordable thanks to a “lack of private investment, along with poor transportation options and infrastructure” — attributes that have made the areas undesirable to more affluent residents. Now that the Arlington County is actively encouraging economic development and planning a new streetcar line along Columbia Pike, however, the “type of households” seeking to live on the Pike will likely change, leading to “opportunities” for the owners of existing affordable apartment complexes to “reposition their properties… to attract higher-income residents.” 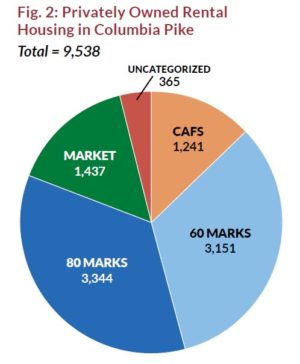 According to the report, there are currently 7,736 affordable, privately-owned rental units along Columbia Pike. Even with the county’s planned efforts to preserve affordable housing on the Pike, however, the report cites county projections that predict 23 percent fewer affordable units by 2040 — a loss of nearly 1,800 affordable rentals.

That loss is expected to be concentrated among the 3,344 market-rate rentals that are affordable to residents who make between 60 and 80 percent of the area’s median income (AMI). About half of the Pike’s 80 percent AMI units are projected to be lost by 2040, while the county focuses its efforts on preserving all of the 3,151 units affordable to those making 60 percent AMI or below. Meanwhile, the county is forecasting a 447 percent increase in market rate (non-affordable) units, or nearly 6,500 new units targeting more affluent renters.