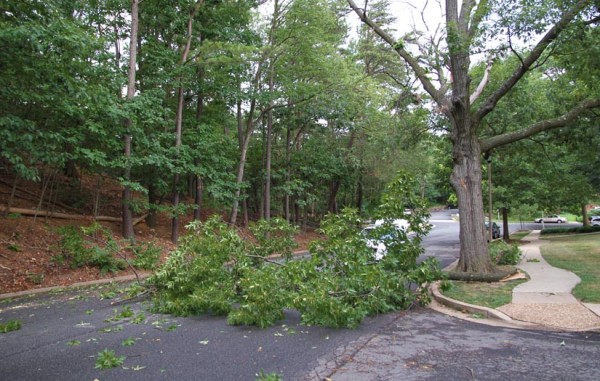 Storm Grazes Arlington — Last night’s storms brought wind and torrential rains to much of the region, but only grazed Arlington. Nonetheless, the storm managed to pack enough of a punch to knock down a large branch in Fairlington, near the intersection of S. Utah Street and 32nd Road.

Arlington Among Fuel ‘Teetotalers’ — Arlington residents spend among the least per month on gasoline, according to an analysis of data from major metropolitan areas by Mint.com. Arlington residents are “teetotalers” at $129 per month spent on fuel. That compares to $112 for D.C. residents and $102 for New York City residents, who spend the least. The biggest “guzzler” was San Jose, Ca. at $216 per month per resident. [CommuterPage Blog]

Sun Gazette Editorial Blasts Feuding Dems — The Sun Gazette has seen enough of the “sad spectacle” of the “uniformly amateurish” primary campaigns of state Senate foes Jaime Areizaga-Soto and Barbara Favola. The paper opines that the feuding Democrats have embarked “on a mission of self-immolation, conspiring for whatever bizarre reason to throw away control of the 31st District.” The war of words in the campaign has opened up an opportunity for Republican Caren Merrick to capture the traditionally Democratic seat, the paper suggests. [Sun Gazette]