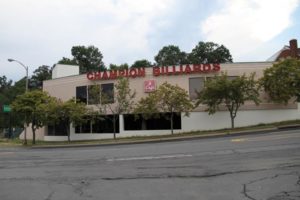 Champion Billiards, a Shirlington-area haven for poolsharks since the early 90s, is getting a new name, a new menu and a pair of new owners.

Misti Wise and Amy Borek were bartenders at Champion (2620 S. Shirlington Road) during the 90s. Now they’re coming back as owners, hoping to turn around Champion’s moribund business by making the place more attractive as a local food-and-drink destination.

“We want to appeal to everybody in the community, not just the staunch pool players,” said Borek. “Our hope is to be a real neighborhood destination… It will be a great story if we’re successful.”

The actual changes planned are somewhat minor. At the end of the month, Wise and Borek are planning to close Champion for a week to freshen up the place: add a new coat of paint, replace the old TVs with new flat screen TVs, spruce up the bar, etc. They will also be changing the name, from “Champion Billiards” to “Lucy’s ARL.” The pool tables and other staples will remain, although a skeeball machine may be added. 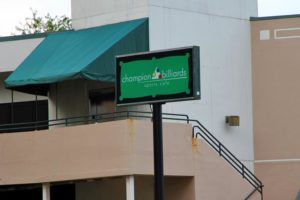 Then there are the planned changes to the menu, which Borek says will be key to attracting new customers. The tired old bar food will be replaced by “good bar food,” while prices will be kept relatively low.

“Before, food was kind of an after-thought,” Borek said. “I don’t want to alienate the existing customer base, so we don’t want to go high-end, but we want to have fun food with a bit of a twist.”

Among the signature menu items that the new owners plan to introduce are “zawiches” — sandwiches that use two slices of pizza instead of bread, like the kind Borek saw venders offering on the streets of Italy. A new, more interesting chicken tender appetizer and a pulled pork sandwich are among the other planned signature items.

Borek and Wise, who officially take over ownership on Sept. 1, will be renting the space from Champion’s existing owner. After working there for many years, then leaving, then coming back, Borek says they’re looking forward to reviving a place that “has history in the community.”

“We’re very, very excited,” she said. “You walk back in and it’s like old times. It’s a cool feeling.”