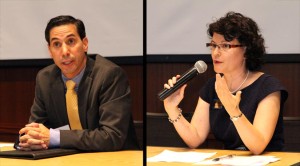 There have been two significant endorsements this morning in the Democratic primary battle for the 31st District state Senate seat.

In its editorial, the Sun Gazette said that Favola provides “common-sense, middle-ground representation” as a County Board member, while Areizaga-Soto lacks experience.

“As newcomer Areizaga-Soto has no political track record to speak of, we can only judge him based on his platform and public pronouncements,” the paper said. “The talking points are all of the garden-variety ‘progressive’ kind that make many Northern Virginia Democrats largely irrelevant in Richmond’s corridors of power… Favola, on the other hand, does have a track record. It is hardly perfect, but it is strong enough to make her a decided favorite in our eyes.”

Englin, meanwhile, said he “can no longer remain silent” about the way he believes Areizaga-Soto has been treated by Democratic leaders.

As a progressive leader in the General Assembly, I generally do not endorse Democratic primary candidates in districts where I cannot vote, and I’ve been especially hesitant to comment on the 31st District Senate primary because my wife is a paid consultant for one of the candidates, Jaime Areizaga-Soto. However, my simmering anger at how my own party’s leaders in the Virginia Senate are handling this race has boiled over, and I can no longer remain silent.

Jaime Areizaga-Soto is a Georgetown and Stanford-educated attorney and a U.S. Army Reserve lieutenant colonel, whom President Obama appointed to a high-level position at the U.S. Agency for International Development. He served as a White House Fellow — one of our nation’s most prestigious programs for leadership and public service, whose alumni include distinguished Americans like Wesley Clark, Colin Powell, and Doris Kearns Goodwin. On top of all that, he’s an Eagle Scout who is fluent in four languages. Yet the retiring incumbent, who just months ago introduced Areizaga-Soto to her constituents as a valued policy adviser, now claims he was a mere intern in her office and accuses him of inflating his resume. Since when does a 41-year-old who is an accomplished attorney, a lieutenant colonel, an Obama Administration appointee, and a White House Fellow need to inflate his resume?

The most senior Democratic leaders in the Virginia Senate continue to attack and belittle Areizaga-Soto, who would be the first Latino elected to the Virginia Senate, because he has the nerve to seek his party’s nomination against their hand-picked choice. They are so incensed by his candidacy that they have spent tens of thousands of dollars to attack him that could otherwise be used to defend their tenuous Democratic majority. This smacks of an earlier era of “good old boy” Virginia Democratic politics that most of us soundly rejected long ago. I have nothing against the other candidate in this race, Barbara Favola, with whom I have enjoyed working on Arlington County issues over the years. But the seat she and Areizaga-Soto seek belongs to the people of the 31st District, not to party bosses or the retiring incumbent to bequeath to the successor of their choice.

I urge Democrats in Arlington, Fairfax, and Loudoun to vote for Jaime Areizaga-Soto for Senate on August 23rd, both because he will be a thoughtful, progressive champion for our entire community, and to send a message that the Democratic Party is still the open, inclusive party of good government we have worked so hard together to build.