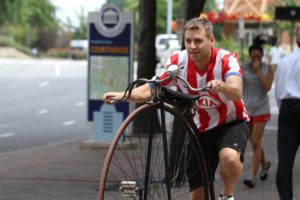 You just wouldn’t know it if you saw him riding down the street on his 1891 Columbia Light Roadster “penny-farthing” bicycle, a bike so old that the only replacement tires you can find for it are sold by the Amish.

Matthews, an employee in the Arlington County communications department and self-professed lover of “old stuff,” has been riding a bike to work every day for 10 years now. For a couple of days last week, Matthews caused a bit of a stir when he started commuting from his home in Falls Church to the county government building in Courthouse on the penny-farthing, instead of on his usual, low-key 1972 Peugeot three-speed. Tweets and emails started coming in to ARLnow.com, asking what was up with the guy pedaling through Ballston on the old-school, high-wheel bike.

As it turns out, the Peugeot had been stolen — like two other bikes before it — and the penny-farthing was the only working-order bike in Matthews’ sizable vintage bicycle collection. The married father of two says he doesn’t ordinarily commute on the penny-farthing, largely due to the fact that it takes twice as long to get wherever he’s going since he is constantly stopped by curious strangers who want to take photos and ask questions. That’s not to say, however, that Matthews doesn’t like the occasional ride on the 120-year-old bike, which weighs 35 pounds and requires little maintenance due to the lack of parts like chains or inner-tubes.

“Keeping it well-oiled is pretty much all you have to do,” he said. “It’s bombproof.”

Matthews’ 2- and 4-year-old also enjoy rides on the penny-farthing, made possible by the fact that his Cannondale children’s bike trailer can attach to the penny-farthing’s “backbone” (the pole that holds the smaller wheel).

You won’t be seeing much of the penny-farthing from here on out, since Matthews has fixed up another vintage bike as his every-day commuter. But the penny-farthing will still make occasional appearances. The bike, which could fetch as much as $2,000 at auction, technically belongs to one of Matthews’ friends, who rides it in parades. The friend has let Matthews ride the penny-farthing in exchange for storing it for the past several years — since the nearly 5-foot tall bike won’t fit in the friend’s home.